« I like to play with the viewer, my lenticular usage triggers the viewer to move around the artwork, and it allows me to produce different sensational environments which are not solely caused by optical or geometrical illusions or – paradoxically – by purely technological artefacts. This is why my artistic practice is a neverending experimentation with what is still un-known or un-thought. »

« Irrationnal Geometrics », at Holly Hunt New York in collaboration with IBU Gallery, from May 19th until August 15th, 2014 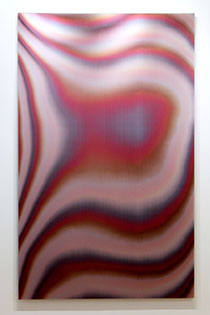